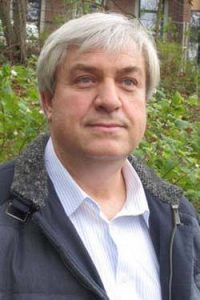 István Markó (1956 – 2017) was a professor and researcher in organic chemistry at the Université catholique de Louvain. Prof. Dr. Marko was an outspoken defender of the skeptical view on the issue of human-caused/anthropogenic global warming, appearing in numerous French-language media on the Internet, in public debates and diverse English-language blog postings. He also joined with Anglo-Saxon climate skeptics, publishing several articles together on Breitbart News.

Grégoire Canlorbe: Climate activism is thought of as Marxism’s Trojan horse, a way for its followers to proceed with their face masked, in the never-ending holy war that Marxism claims will be necessary to establish communist totalitarianism. Yet it was actually Margaret Thatcher, the muse of conservative libertarianism, who kick-started the IPCC. How do you make sense of this?

István Markó: More precisely, Margaret Thatcher, although a trained chemist and therefore aware of the mendacious character of such an allegation about carbon dioxide (CO2), was the first proponent to use the excuse of climate implications posed by CO2 to achieve her political ends. At the time, that is, in the mid-1980s, Thatcher was waging war with the almighty coal union. In those days, the UK coal unions were remunerating themselves with public monies and by lobbying via the Labour Party had managed to pass an enormous number of laws and subsidies to keep an industry afloat that was no longer profitable on its own.

While facing a strike by the British miners, chaired by Arthur Scargill, (nick-named “Arthur the Red”) who was later to found and lead the Socialist Labor Party, Thatcher thought it worthwhile to enshrine the thesis of warming linked to CO2 emissions to wind up the trade unionists holding her country hostage. But she was not really the initiator of the IPCC. The “kick-off,” as you call it, came more from personalities who were involved in hard ecologism,[1] such as Norwegian Gro Harlem Brundtland, who chaired the UN Commission responsible for the famous 1987’s report “Our Common Future,” or Canadian Maurice Strong, who ranks among the founding members of the IPCC.

The belief in a catastrophic greenhouse effect due to CO2 emissions provided Thatcher with an additional asset, in her arm wrestling with the union, to set up the United Kingdom to get out of coal and to transition to nuclear energy. It was a belief she knew to be unfounded, but one she largely helped to entrench and popularize. One can, admittedly, deplore Thatcher’s strategy based on a perversion of science. The fact remains that, at that time, the electric power generation industries, notably that from coal, did not do so under very clean conditions. Even though CO2 has absolutely nothing to do with a poison, there existed then a real pollution associated with coal burning due to a lack of modern emission control technology.

Indeed, the combustion of coal not only produces innocuous CO2 emissions, it is accompanied by sulfurous and nitrogenous waste, produces SO2 emissions, SO3 emissions, and NOx emissions, ejects fine particles, and leaves nominally radioactive ashes (despite the fact that the epidemiological evidence and data for any serious health harms are still very controversial and hard to come by). Since the 1980s, the treatment of industrial pollution has however evolved. Today an electrical utility power generation plant that uses coal as a raw material now results in very little environmental pollution.

Grégoire Canlorbe: According to you, a person sensitive to pastoral charms, smitten with lounges of greenery and variegated grass beds, can only celebrate the increase in the concentration of carbon dioxide in the air. Could you come back to the necessity to stop demonizing CO2 as a “Satanic gas” in view of the objective data of chemistry?

István Markó: Again, CO2 is not, and has never been, a poison. Each of our exhalations, each of our breaths, emits an astronomical quantity of CO2 proportionate to that in the atmosphere (some >40,000 ppm); and it is very clear that the air we expire does not kill anyone standing in front of us. What must be understood, besides, is that CO2 is the elementary food of plants. Without CO2 there would be no plants, and without plants there would be no oxygen and therefore no humans. The equation is as simple as that.

Plants need CO2, water, and daylight. These are the mechanisms of photosynthesis, to generate the sugars that will provide them with staple food and building blocks. That fundamental fact of botany is one of the primary reasons why anyone who is sincerely committed to the preservation of the “natural world” should abstain from demonizing CO2. Over the last 30 years, there has been a gradual increase in the CO2 level. But what is also observed is that despite deforestation, the planet’s vegetation has grown by about 20%. This expansion of vegetation on the planet, nature lovers largely owe it to the increase in the concentration of CO2 in the atmosphere.

If we study, however, what has been happening at the geological level for several million years, we realize that the present period is characterized by an extraordinarily low CO2 level. During the Jurassic, Triassic, and so on, the CO2 level rose to values sometimes of the order of 7000, 8000, 9000 ppm, which considerably exceeds the paltry 400 ppm that we have today. Not only did life exist, in those far-off times when CO2 was so present in large concentration in the atmosphere, but plants such as ferns commonly attained heights of 25 meters. Reciprocally, far from benefiting the current vegetation, the reduction of the presence of CO2 in the atmosphere would be likely to compromise the health, and even the survival, of numerous plants. To fall below the threshold of 280 or 240 ppm would plainly lead to the extinction of a large variety of our vegetal species.

In addition, our relentless crusade to reduce CO2 could be more harmful to nature as plants are not the only organisms to base their nutrition on CO2. Phytoplankton species also feed on CO2, using carbon from CO2 as a building unit and releasing oxygen. By the way, it is worth remembering that ~70% of the oxygen present today in the atmosphere comes from phytoplankton, not trees: contrary to common belief, it is not the forests, but the oceans, that constitute the “lungs” of the earth.

About the supposed link between global warming and CO2 emissions, it is simply not true that CO2 has a major greenhouse effect. It is worth remembering, here too, that CO2 is a minor gas. Today it represents only 0.04% of the composition of the air; and its greenhouse effect is attributed the value of 1. The major greenhouse gas in the atmosphere is water vapor which is ten times more potent than CO2 in its greenhouse effect. Water vapor is present in a proportion of 2% in the atmosphere. Those facts are, in principle, taught at school and at university, but one still manages to incriminate CO2 alongside this learning, in using a dirty trick that presents the warming effect of CO2 as minor but exacerbated, through feedback loops, by the other greenhouse effects.