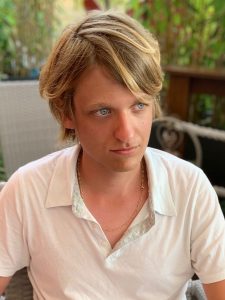 An independent scholar, Grégoire Canlorbe has conducted numerous interviews with natural and social scientists for academic journals such as Psych and Man and the Economy, which was founded by Nobel Prize winning economist Ronald Coase.

Besides his academic interviews, he regularly collaborates with cultural medias such as American Renaissance and The Postil Magazine. He also cooperated with sociologist and philosopher Howard Bloom (formerly  Michael Jackson’s, Billy Idol’s, and many others’s press agent) on a book of conversations (not published yet) about the behavior of masses in the universe, from atoms to humans. Finally Canlorbe is the author of a number of metaphysical and metapolitical articles.