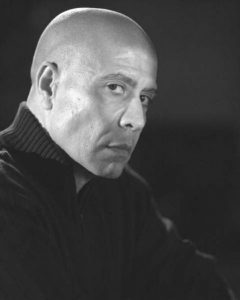 END_OF_DOCUMENT_TOKEN_TO_BE_REPLACED

Daniel Conversano, co-founder of the Suavelos association, is a Franco-Italian thinker and novelist who defines himself as a white advocate and Westernist. He is the author of Désolé Jean-Pierre, and publishes twice a month long filmed interviews with figures of nationalism, cultural and political interviews that he has been conducting since April 2016. The program is called “Vive l’Europe” and is very successful on the French-speaking net.

Daniel Conversano: In my opinion, there is no nation without a people. This is why I have long defined myself as a nationalist and not as a patriot, the difference between the two being that the nationalist takes into consideration the people in its racial dimension—the blood. France is a white country, like all European countries. The population of a white nation may change ethnically from one European group to another, it will remain a white country, and therefore a European nation.

As for clarifying what the “white race” is, there are many scientific definitions from anthropology to population genetics. At minimum, I think we can agree on an almost geographical approach to the notion—namely, that the whites are “the locals” of Europe. The French people are made up of Celtic Whites, Germanic Whites, Franks, Latins, Basques, and Bretons. These are the main ethnic groups that forged the history of France.

Grégoire Canlorbe: You like to describe the civilization of the white race, or Western civilization, as superior. Please explain.

Daniel Conversano: I consider culture as the product of blood. Peoples achieve at levels that correspond to their aptitudes. They develop the value systems that express their mentality. It is, admittedly, not politically correct to point this out, but it is possible to establish hierarchies between nations according to results—whether from the point of view of technology, standard of living, arts, or individual.

I would not say that Western civilization is absolutely superior to Chinese or Japanese civilization, for example. As for the Arabs, it must be understood that their culture has been destroyed by Islam, and that their current backwardness seems essentially linked to religious rather than ethnic reasons. Black Africans have never created civilizations, in the generally understood sense.

Clearly, Western civilization—and by that I mean Europe, North America, Australia, or even Western Russia—seems to me to be superior to everything that could be produced on the African continent and in much of the Islamic East. It is in the West that one lives the best, and immigration from the Third World reflects this.

Grégoire Canlorbe: It is sometimes argued, in the field of historical sociology, that the foundation of Western civilization lies in heroism—in praising and encouraging exceptional individuals because they are exceptional. Do you agree?

Daniel Conversano: Yes, heroism is at the heart of the story of the white man. The history of the West boils down to the slow and progressive understanding of the uniqueness of human life, and of the individual importance of exceptional men, whose scientific, political or artistic work stands the test of time. How have we been able to offer those men the life they deserve, so that their genius may flourish? That’s what fascinates me. In this respect, the West seems to me to be distinct from Asian cultures, which put the collective before the individual, social cohesion before self-fulfillment, and are therefore not favorable to the expression of human genius.

There are men who have more individual worth than others—in any society. It is normal that those men be put forward. It is normal for them to be given a life that allows them to give their best and perform works that benefit the whole of society. I do not defend just free enterprise; I defend a mobile hierarchy, which rests on natural superiority, and which rewards genius, intelligence, work, honor, abnegation, and the capacity to bring good to society.

To me, liberalism should be the means to establish a just hierarchy—as opposed to a rigid hierarchy that disdains the deserving and creative individual, and does not allow him to rise socially. Frédéric Delavier puts it well: France is essentially a country of castes that ignores the culture of heroism in favor of a culture of degrees and credentials. It goes without saying that I am not nostalgic for the Ancien Régime, although I readily admit that it was the royalists who made France. A person born a commoner had a predetermined fate, dark and off-putting; he could not hope for improvement. The castes of the past were not much more rigid than those of today.

At the bottom line, I would say that we have to preserve heroism, which veritably stems from the Greek spirit, but to go forward rather than ignore the obsolete character of the inequalities of the Ancien Régime. We must defend the French people, which is a European people of the white race and a Christian culture, but I would say that we must promote liberalism—on the condition that it favors individual fulfillment, and that it allows a more equitable society, instead of enforcing a new caste system based on money, nepotism, and academic degree. For this reason, the synthesis of national-liberalism seems to me to be the politically desirable path.