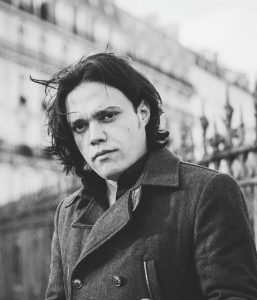 Waleed Al-Husseini is a Palestinan blogger and essayist as well as the founder of the Ex-Muslim Counsel of France. He garnered international fame in 2010 when he was arrested, imprisoned and tortured for articles he posted in which he criticized Islam. He has received threats and death threats. He is one of the most celebrated cyber-activists from the Arab world and now lives in France where he sought refuge. He continues to be a fierce defender of its secular, republican values.

He is the author of an autobiography, Blasphemer! Allah’s prisons! edited by Graset in 2014 (re-issued in 2015), as well as articles in Le Monde, La Règle du jeu and Libération. His blogs are “la voie de la raison” and “I’m proud to be atheist.” Contact: hassayen@gmail.com

Grégoire Canlorbe: Could you start by reminding us of the circumstances and motives of your dissent?

Waleed Al-Husseini: My atheism is the result of a long quest for the truth about what I saw happening in front of me. Obviously, nobody holds all of the Truth, but during my research, I realized that religion in general, and Islam in particular, was highly incompatible with the values of human life. That was the beginning of my rejection of Islam. As time goes by, the horrors and crimes committed against mankind in the name of Islam seem to have proven me right. They have strengthened my conviction that it was the right choice to make.

Grégoire Canlorbe: Despite being jailed, tortured, threatened, persecuted and socially pressured, you have never given up your opinions or curbed your determination to defend them. How come?

Waleed Al-Husseini: Once I had made up my mind, I had to defend my new convictions against all sorts of pressures, whether in prison or in the street. To do so, I gathered my strength out of the weakness and archaism of the religious speech. I simply used intelligence against faith. The former opens the mind, the latter puts human beings in prison. It feels as if religious leaders practice some sort of psychological torture on their followers in order to dominate them. In Muslim societies, all the citizens live in a huge prison called Islam. I wish to remind the readers that, if I am deeply hostile to Islam as a religion, I respect Muslims as human beings and deplore the situation in which they have to survive.

Grégoire Canlorbe: “Mahometism, writes Tocqueville in his Writings on the Koran, is the religion that has mixed both political and religious powers, and in a way that the high priest is necessarily a prince, and the prince is the high priest, and all the acts of civil and political life are ruled more or less according to religious law… This concentration and confusion established by Mahomet between both powers… was the primary cause of despotism and social immobility… which has always been a characteristic of Muslim nations.”

Do you think that things can change? Or that Islam—and the Islamic world—cannot be reformed?

Waleed Al-Husseini: During the genesis of Islam—which looks in many aspects like a sect—the political power relied on religion in order to control and dominate society. Subject to certain exceptions, the situation has not changed in 1,400 years.

In his time, the prophet Mahomet had already made use and abuse of many fatwas, attributed to the angel Jibril, in order to justify what can never be justified. He awarded himself the right to rape young girls, in the name of poligamy, and used religious discourse to wage his wars, which he called “Islamic conquests”. He also committed the first war crimes in the name of Allah—upon, he claimed, divine command!

The same methods are still common practice today, in the main Islamic countries. Iran is ruled by the Wali e-Faguih, the Supreme Leader, who claims he is “God’s vicar on Earth”. Saudi Arabia is under the rule of the “Keeper of the holy Places”. The king of Marocco is the self-proclaimed “Commander of the believers”. In the other muslim countries, the rulers call themselves Wali al–Amr, “the tutor”, a title that works as a deterrent, allowing imams to use religion in order to ban any possible objection to the tutor’s authority.