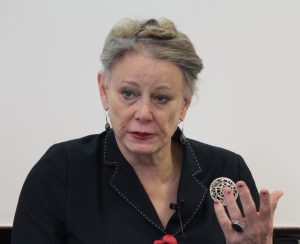 Deirdre Nansen McCloskey taught at the University of Illinois at Chicago from 2000 to 2015 in economics, history, English, and communication. A well-known economist and historian and rhetorician, she has written 17 books and around 400 scholarly pieces on topics ranging from technical economics and statistical theory to transgender advocacy and the ethics of the bourgeois virtues. She is known as a “conservative” economist, Chicago-School style (she taught in the Economics Department there from 1968 to 1980, and in History), but protests that “I’m a literary, quantitative, postmodern, free-market, progressive-Episcopalian, Midwestern woman from Boston who was once a man. Not ‘conservative’! I’m a Christian libertarian.”

Her latest book, out in May 2016 from the University of Chicago Press—Bourgeois Equality: How Ideas, Not Capital or Institutions, Enriched the World—argues for an “ideational” explanation for the Great Enrichment 1800 to the present. The accidents of Reformation and Revolt in northwestern Europe 1517–1789 led to a new liberty and dignity for commoners—ideas called “liberalism”—which led in turn to an explosion of trade-tested betterment, “having a go.”

The earlier book in the trilogy, Bourgeois Dignity: Why Economics Can’t Explain the Modern World (2010) had shown that materialist explanations such as saving or exploitation, don’t have sufficient economic oomph or historical relevance. The first book in the Bourgeois Era trilogy, The Bourgeois Virtues: Ethics for an Age of Commerce (2006), had established that, contrary to the clamor of the clerisy left and right since 1848, the bourgeoisie is pretty good, and that trade-tested betterment is not the worst of ethical schools.

Grégoire Canlorbe: Could you start by reminding us of the lines of force of your libertarian case in favor of the principle of unhampered market economy and against the belief that state intervention is virtually omnipotent?

Deirdre McCloskey: One principle and one consequence. The principle is the liberal one that persuasion and trade are better for humans than violence and compulsion. The liberal principle fosters the bourgeois virtues, as against the aristocratic/bureaucratic vices. It has long been praised—by the Blessed Smith, by Mill, by Herbert Spencer, by Mises and Hayek and Friedman. Smith wrote of “the obvious and simple system of natural liberty,” and declared in 1755 that “little else is requisite to carry a state to the highest degree of opulence from the lowest barbarism, but peace, easy taxes, and a tolerable administration of justice: all the rest being brought about by the natural course of things.” He did not realize how very true his deduction from the liberal principle would prove to be, when slowly adopted in the nineteenth century, against the old and new pressures of mercantilism—as old as the Navigation Acts and as new as the Trump administration.

The consequence is that adhering to the liberal principle, as China has in economic policy since 1978, and India in both economy and polity since 1991, yields a Great Enrichment, a rise of real income per head in a couple of generations from horrible poverty to reasonably comfort—on the order not of 100% or even 200%, but 3,000%. The consequence of liberalism after 1800 was that masses of ordinary people were encouraged to have a go. The having-a-go resulted in steam power, plate glass, autos, containerization, and the modern university.

Grégoire Canlorbe: One of your favorite fields of study, in which Vilfredo Pareto may have been a precursor with his theory of “residues” and “derivations,” is the rhetoric of economics. A salient feature of our epoch, in this regard, seems to be the invasion of anticapitalist fallacies. “Every mystery, past, present, or future, wrote Pareto sarcastically in The Mind and Society, yields to the magic password ‘capitalism.’ Capitalism, and capitalism alone, is the cause of poverty, ignorance, immorality, theft, murder, war.” How would you account for the persisting attractiveness of anticapitalist rhetoric? How do you respond, in particular, to Thomas Piketty’s highly popular claims about the worsening of income inequalities?

Deirdre McCloskey: I myself was a long time ago a mild-mannered Marxist. I think the attractions of socialism arise from our experience as children in a loving family, in which income falls myserteriously from Dad, and Mom is the central planner. Unless we are raised on a farm or in a small business, we get no early instruction in the charms, and terrors, of voluntary exchange. We think commands rule the economy, the way commands do rule the family or firm inside—though the child does not realize that prices in markets outside rule all. It is shocking to a child of the bourgeoisie such as Marx and Engels and Lenin, to find that he or she cannot command the rich to relieve poverty. It does not occur to the child that voluntary exchange, and having a go under a liberal ethic, are what has in fact relieved poverty. The relief has not come out of redistribution by state violence from the rich to the poor.

As to Piketty, I wrote a 50-page, respectful review of his book, concluding that it was a brave attempt, but mistaken in ethics and economics and history. I listened in October of 2016 in Shanghai to a paper by Samuel Bowles, an ex-Marxist economist at the Sante Fe Institute, in which he showed that in fact the income distribution is notably similar in all societies, old and modern. That Sam then suddenly concluded that we need to massively redistribute income shows merely the persistence of the leftward lean acquired as a child, against the evidence of its failures accumulated as an adult. A policy of redistribution does not follow naturally from Sam’s amazing historical findings. Rather the contrary.